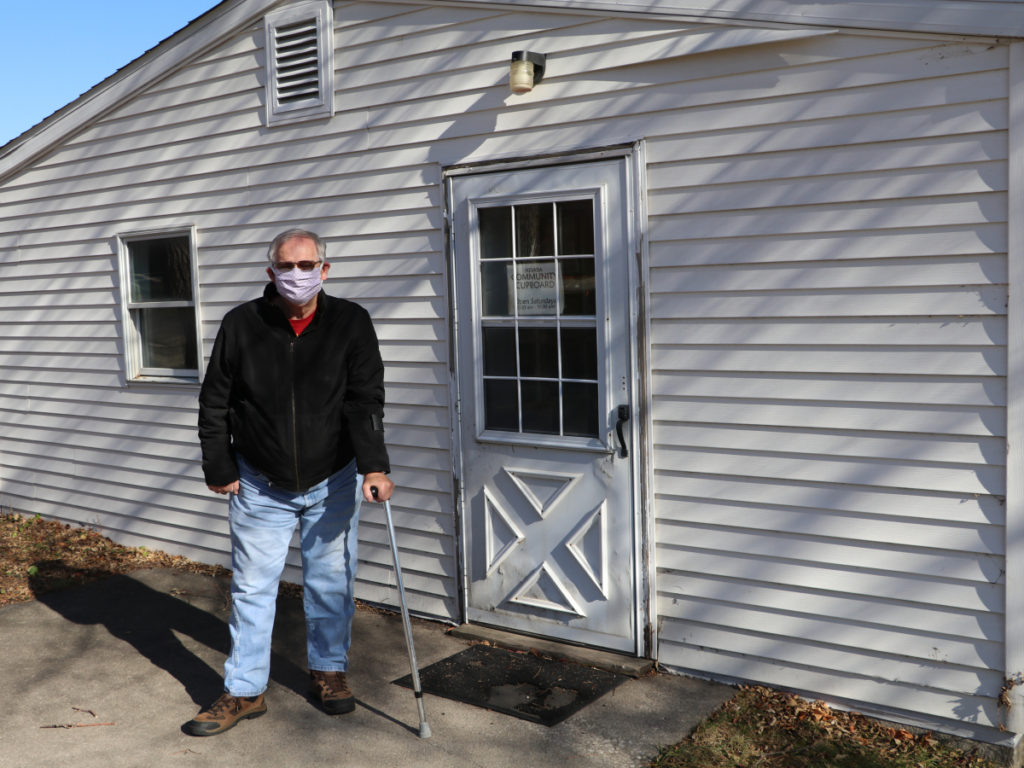 For years, Gil Petersen has been as much a staple to Nevada’s families in need as the food he provides from the Nevada Community Cupboard.

After 23 years — he started in May of 1997 — Petersen is stepping down as director of the Cupboard at the end of this year.

Marlys Brehm, who serves on the Cupboard’s Board of Directors, said Petersen would be missed. “He knows everybody who comes in. He knows their situations. He’s respectful of everyone. He knows when a family is going through a difficult time; he’s just so aware. And, he runs the Cupboard with an efficiency that’s amazing.”

Petersen said it is time for him to retire from this position, mostly a labor of love. Brehm said the Cupboard pays a small stipend to the director and reimburses some expenses, but it’s very much a position of giving back.

Petersen took the position in 1997, believing it was something he could do. Previously employed by Hertz Farm Management, Petersen became disabled in 1994 when he started bleeding internally during back surgery. “I severed all my nerves from the waist down,” he said. He had to learn to move slowly with a crutch from that point on.

In considering the job with the Cupboard, which keeps and supplies food for families in need, “I felt I could stock shelves and line up people to work on Saturdays. It was something I could do on my own schedule,” he said.

Meeting people and working with people are the things Petersen’s enjoyed most about running the Cupboard. “Most are appreciative of having someone there to get them food,” he said.

The need for food is real in Nevada, though Petersen said some things during this year of COVID have been different than one might think. “It was kind of surprising for me that when COVID started, our numbers (needing food) actually went down.” He attributes that to the Nevada School’s huge effort to continue to feed students when they weren’t coming to the buildings.

This fall, he said, “our numbers are picking up again. We serve around 100 families a month.”

Much of the food given out at the Cupboard comes from the Iowa Food Bank. “Early on, someone suggested I go to the Food Bank, where you buy food by the pound.” The Food Bank’s ability to sell in bulk at very low prices has been a valuable resource for many food cupboards, including Nevada’s, Petersen said.

In recent years, the Iowa Food Bank also offered delivery service, making it even easier for recipients. “You just have to be there when the truck is going to be there,” Petersen said.

The Nevada Community Cupboard Board, which is comprised of representatives from many of the churches in town that support its mission, now has a big task ahead of it. The board is looking for its next director.

Most importantly, from Brehm’s perspective, the new director should have the ability to relate to people. She said a background of service would be valuable.

Petersen said to those interested in taking on this position, “you need the ability to handle money, the ability to look at what’s in the Cupboard, and what is needed for the next Saturday. You’ll need to have flexibility when people call and want food … and you’ll need to be organized.”

He added that it’s important to be willing to work with people and be considerate of people. “You have to understand that sometimes, people just want to talk and need someone to listen.”

Petersen wants to acknowledge and thank Ron Weber of Nevada. “In 2018 when I broke my hip, Ron stepped up to help me with the Cupboard.”

Petersen is hopeful the right person will step forward now and take on this important community position. “Nevada would miss the Cupboard if they didn’t have it. It’s a neat job, really.”

If you’d like to learn more about the position and/or apply for it, you may talk to any of the Board members: Marilyn Brodie, Mark Larson, Teresa Haaland, Marlys Brehm, Brigietta Couser and Carole Whitehead.