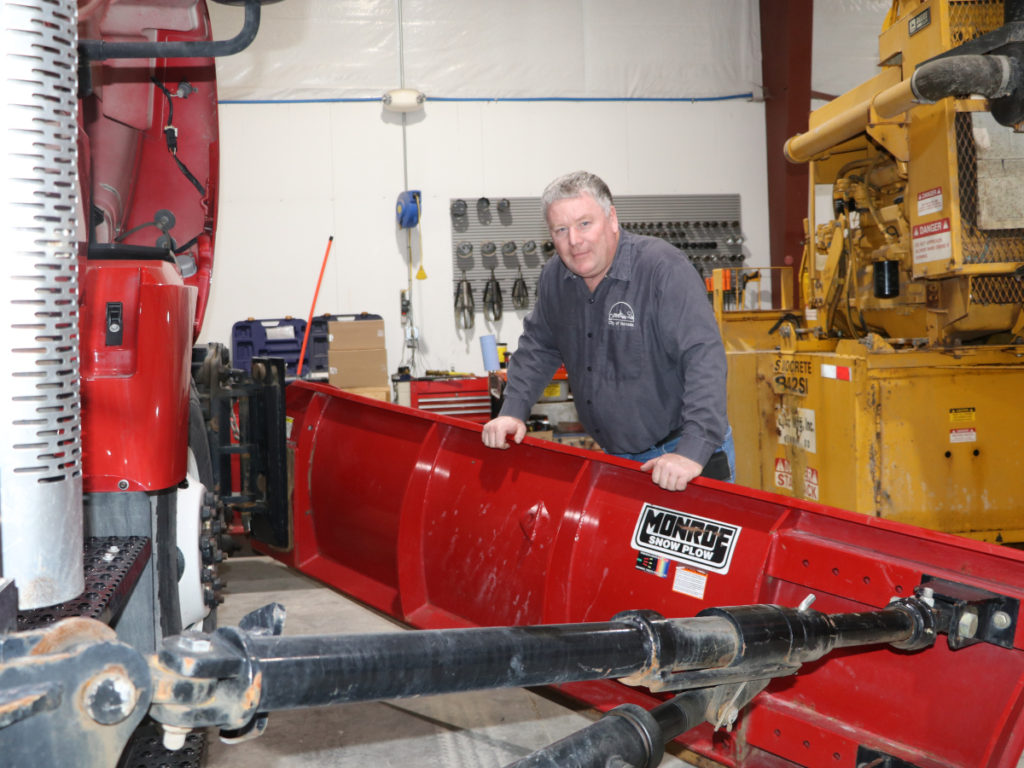 Note: This is the second of three stories on three Nevada Streets Department employees who celebrate 30 years with the city in 2021.)

When he’s not working for the Nevada Streets Department, you might catch Mike Ackerman walking around town with his wife, Patsy; riding his Harley; or volunteering his time with the local high school FFA chapter.

However, during the workweek, you’d be more likely to catch Mike driving a City Streets Department truck, headed to work on something. He’s one of three City Streets employees to hit the 30-year mark this year.

“The only reason I came to work for the City was because my dad was working for the County, and he told me, ‘You need a retirement,'” Mike recalled.

If it had worked financially, Mike said he would have pursued farming for a living. He spent his youngest childhood years on a farm and worked five years for the Flynn farming operation before taking his job with the City.

His heart, he admitted, is still in the country. “I just loved being outside. You’re by yourself, but you’re not. There’s life (nature) all around you.” This love for farming is why he loves helping FFA Director Kevin Cooper in many ways throughout the year.

A 1981 graduate of Nevada High School, Mike was involved in football and wrestling in junior high and high school. Does he have memories of great teams? He chuckles. “Our football team was absolutely terrible. We had maybe two or three wins in all the years I played.”

But he still loved it. “You just wanted to do it to be with everybody else at school.”

His family moved to the Nevada area when he was 3 or 4 years old, and he lived on a farm until he was junior high age. He remembers youthful days of baling hay, walking beans, and detasseling corn. “We did it as a family.”

In high school and as a young adult, he loved being out with his friends. “We didn’t cause trouble; we were just out … meeting up with friends and going to sports events.” He has fond memories of attending Motocross races with Justin Rewerts and Kent Severson and hanging out at Ames Cycles.

When he thinks back to the Nevada of his school-age days, he remembers going to the movie theater and nearby arcade.

After high school, Mike studied automotive diesel mechanics at a technical school in Des Moines. I worked at Stew Hansen Dodge in Des Moines for two years. “Then I came up to Nevada and worked at NAPA in the machine shop before working for Flynns,” he said.

Even with 30 years in, Mike doesn’t see himself leaving his job with the City Streets Department right away. “I enjoy coming to work,” he said.

From the guys he first worked with to the crew he works with now, Mike said, “it was fun being with the older guys who’d been around and listening to their stories. Now we are telling other (newer) guys those same stories. We’re the old guys now.”

Most of the time, in the City Streets Department, Mike said, “citizens are really thankful for what you do. During the derecho this summer, we got a lot of praise, and we just went out and did our job. But we had people bringing us treats and water or waving at us when we went by. They were very thankful.”

The flooding of 1993 was another event he recalled as being crazy. “I worked with (Gary) Flack and (Mike) Oxley. We went 26 hours straight just keeping pumps running and sandbagging. And Harold Mitchell sent us home for about eight hours and then said he needed us back for another 20 hours.”

Plowing snow can also entail long hours, but Mike is proud of the job the Nevada Streets Department does. “Most people tell us it’s a very good job compared to other towns.”

As long as the hours can be at certain times with this job, Mike said, “when you see people’s appreciation, it’s worth it.”

Current Director of Public Works Jeremy Rydl said the department benefits from the knowledge of Mike, Dave Harrison, and Dennis Mensing. “There’s a lot of experience that comes with these three employees, and that greatly helps our department,” Rydl said.

The City congratulates Mike on 30 years of service with the Nevada Streets Department.