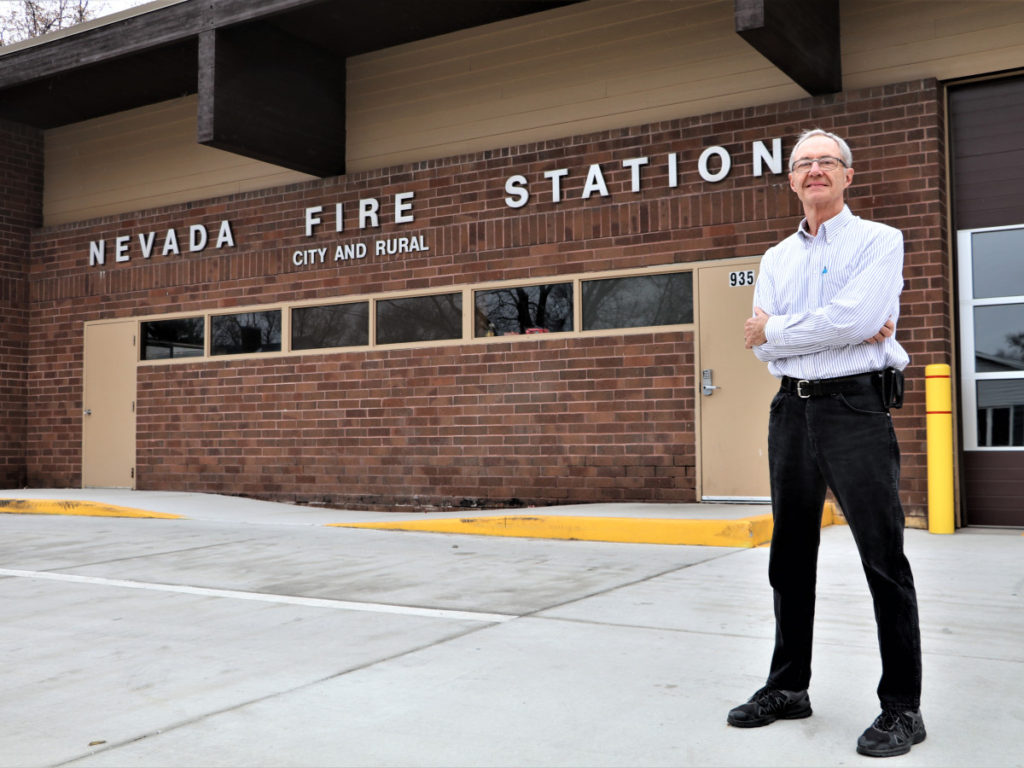 Carl Vogeler moved to Ames a little over a year ago with his wife, Val. The move allowed the Vogelers to be close to their two children and two grandchildren.

The move also provided the Nevada Fire Department an opportunity to have Vogeler serve as its chaplain, and Vogeler is no ordinary chaplain. Normally, we think of a chaplain as someone with a degree in seminary or theology. Instead, Vogeler has a degree in engineering and a passion for helping people. This passion and a strong interest in religious studies earned him the “chaplain” title at a privately owned business. And now, he’ll bring his passion for people and a long history of public service, as the “chaplain” for the Nevada Fire Department.

Raised in Chicago, holding a civil engineering degree from the University of Wisconsin Platteville, Vogeler moved to a south suburb of Chicago after receiving his degree, and “I got interested in the local fire department. I ran with them whenever I was home,” he said.
He eventually became an EMT and earned paramedic certification. “I thoroughly enjoyed it,” he said.

Wherever his life or engineering job took him, he often continued being a firefighter and EMT. One of the most difficult situations he faced was a trailer fire in the early 1970s. He entered and found the deceased 3- and 8-year-olds. There was also a deceased mother and infant in the trailer, found by other firefighters, and Vogeler had his own infant at home at the time.

“No one talked about all of that post traumatic shock syndrome help back then, and I don’t think I suffer from it,” he said, “but I can still draw you a floor plan of that trailer.”

In the mid-1980s, Vogeler came to Iowa to work at the Duane Arnold Energy Center at Cedar Rapids. He took early retirement from the company after 20-years of service there.

He next answered an advertisement to be a hospital emergency preparedness coordinator. Grant money supported six of these positions in the state, and Vogeler was assigned to the northern tier of Iowa. “I thoroughly enjoyed it. It was wonderful,” he said of the work, which lasted until the grant money was gone.

Through his church, Vogeler knew the owner of a small manufacturing business. He needed someone to help with safety. “The owner was a very strong Christian,” he noted, who had talked about bringing on a company chaplain.

“He wanted somebody who knew people and cared about people,” Vogeler said. One day, the owner shocked Vogeler by offering him the company chaplain position. “I wasn’t formally trained (as a chaplain), but I had taken a lot of Bible studies and did (Christian) teaching. I had 65 years of ‘on the job’ experience. That’s what the business owner wanted.”

While he didn’t know quite what the job would look like, Vogeler took the part-time opportunity. He still drives to Cedar Rapids one day a week for this position.

“If a guy’s head is not on straight, if they’re not in the game (because of personal troubles), they could get injured or do something wrong,” Vogeler said of the reasons his boss wanted a chaplain for his company. He knew the importance of having people be mentally healthy. Having a visible chaplain and friend, who the employees could talk to, is what Vogeler became.

The chaplain position has allowed Vogeler to help workers through financial troubles and marital and family issues. It’s allowed him to provide funeral services for workers with no church affiliation. He’s been a presence for providing comfort to any worker who may need it.

Essentially, this ability to provide comfort, advice, a listening ear will be his role with the Nevada Fire Department.

He met a fire department member when he stopped briefly at the station on his way back from Cedar Rapids recently.

Vogeler said his reason for stopping was to give the department a booklet he’d used in his hospital job. “It’s a neat little booklet” on how to serve people with disabilities better. He’s been handing them out to several area fire departments.

When he handed a business card to Nevada firefighter Jeff Gilchrist, Gilchrist noticed the word “chaplain” right away. That led to a call from Nevada Fire Chief Ray Reynolds and a meeting where the two talked about Vogeler’s years of experience as a firefighter and EMT, and his more recent experience as a chaplain.

To serve the Nevada Fire Department’s members, Vogeler said his initial task would be getting to know them. As he got to know the guys at the factory, he said, “I could tell when a guy didn’t seem quite well. I was able to get them to allow me into their lives to talk” sometimes over lunch or a cup of coffee.

He recalled working with a person who always seemed to have the weight of the world on his shoulders, a constantly worried person. “I try to say, ‘You’re not designed to carry all of this. I share what the Lord has provided … Christ died for this… You don’t have to carry this [worry] around all the time.”

For the Nevada firefighters, Vogeler hopes to be the friend who is there to listen and there to assure them they can let their troubles go.

“In my own career of 30 years,” said Nevada Fire Chief Ray Reynolds, “the trauma we all experience does not go away. I only wish there had been people at my side when critical points in my career did not go as planned.”

Reynolds continued, “We made a promise to our firefighters and medics, they will not be alone when darkness of this profession enters the room. Creating healthy firefighters is our leadership team goal.”

Vogeler recently met with the Nevada Fire Department members, shared about his time as a firefighter and EMT, and told them he wants to be available to them.

“My gray hairs hopefully bring some level of maturity.” Soon to be 72, Vogeler continued, “Part of it for me is, I don’t have fear… I’ve got the hope, a promise that I’m looking forward to. I just want to share that and finish my life well.”