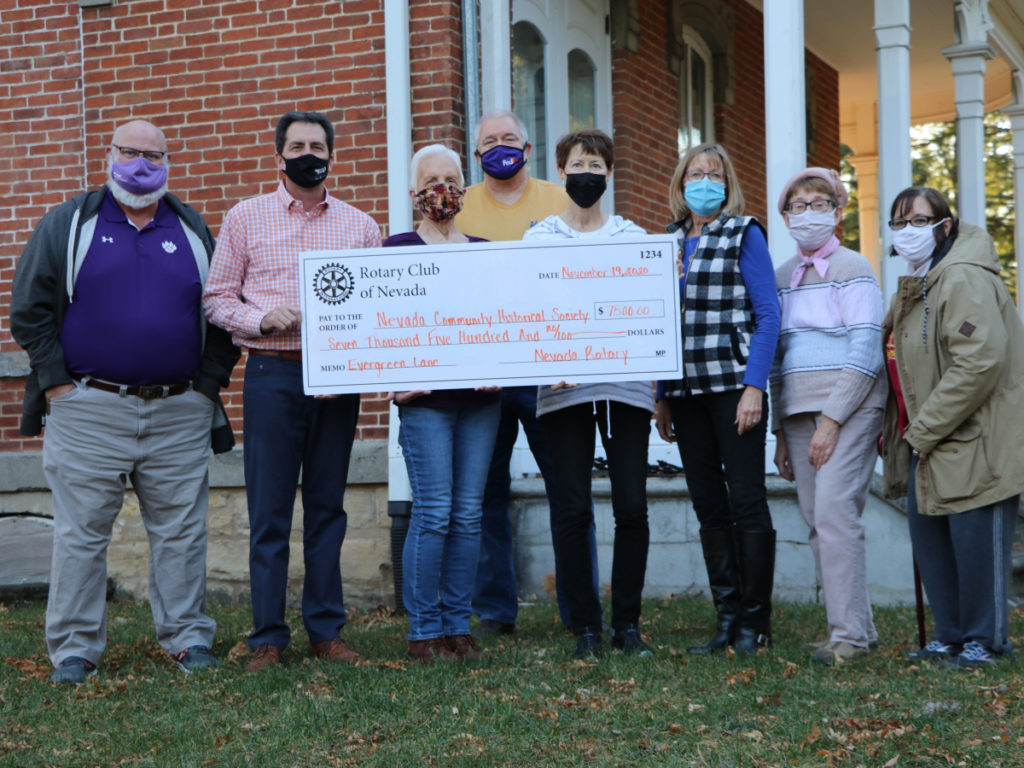 As hard as the Nevada Community Historical Society has worked to improve Evergreen Lane, in less than an hour this past August, a highly unusual inland hurricane in Iowa caused $70,000 damage to the property’s house alone.

“That’s just the house,” emphasized Kris Corbin, a member of the Nevada Historical Society who lives across the street from Evergreen Lane and helps with much of the property upkeep.

For days on end, volunteers worked at Evergreen Lane to clean up downed trees and parts of trees.

Next spring, more repair work will happen, thanks to the goodness of so many Nevada residents, businesses, and organizations.

One of those organizations, Rotary Club of Nevada, made a presentation this week to the Nevada Historical Society.

As explained by current Rotary President Dick Pringnitz, Rotary District 6000 Disaster Response Team received funding from the Rotary Foundation to assist the District’s clubs with derecho damage. The Nevada Rotary Club, which has a history with the Dutton house (Evergreen Lane), applied for assistance.

Pringnitz said Nevada Rotary received the highest grant amount possible, $7,500, which was presented this week to the Nevada Historical Society. It was a gift that carried sentimental value.

The connection between the historical home and Nevada Rotary dates back to the club’s earliest days, as researched by Rotary President-elect and grant facilitator, Emmi Miller. Nevada Rotary started May 1, 1922, and its first president was Mr. Jay Dutton, who lived in the home that is the centerpiece of Evergreen Lane.

Club history tells of Rotary members often gathering at the Dutton home for their first meetings.

Fifteen years ago, Nevada Rotary helped restore what used to be Jay’s old study on the main level of the home.

Its current financial contribution will help repair the retaining wall in front of the home. That wall was torn apart in the derecho when a tree fell on it.

Corbin said bids are being received at this time to replace the wall with either a poured concrete wall or a block wall.

Much of the damage from the August storm will be covered by insurance. What wasn’t covered has been of huge importance to Nevadans who want to help. Corbin noted the Historical Society is very thankful for the huge fundraising effort, with matching funds from Burke Corporation, which will help cover other repairs not covered by insurance.

Also fantastic for the Rotary Club is a future celebration which will put the Dutton home front and center. The Club will celebrate its centennial anniversary in May 2022, and it plans to have that celebration at the place where everything started, the Dutton home/Evergreen Lane.