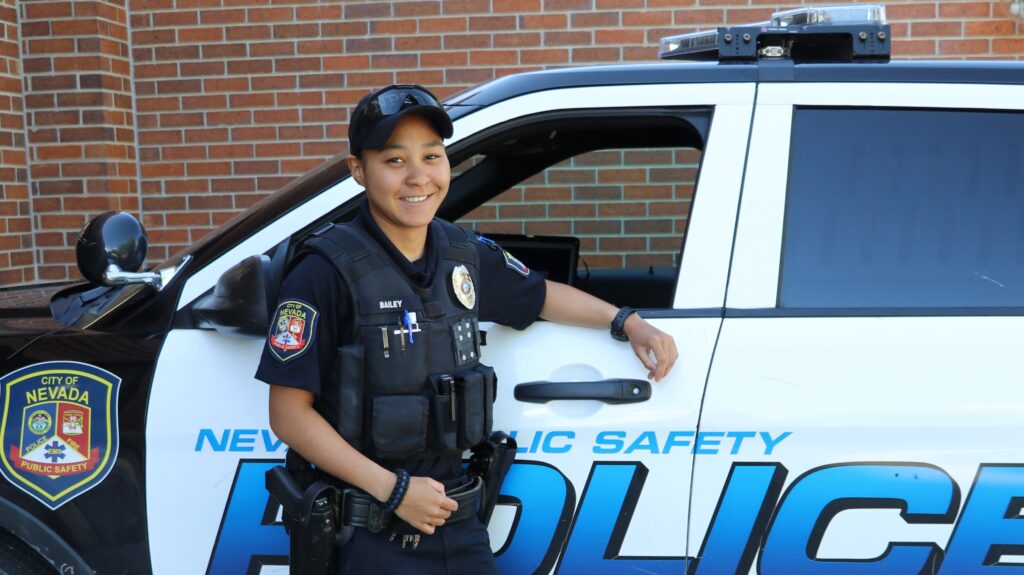 One month away from being deployed to the Middle East, Nevada Police Officer Josie Bailey displays no outward signs of emotion or fear.

The 24-year-old Grinnell native, who will serve as a medic with the 1-194th Field Artillery out of Ft. Dodge, said this type of deployment has been on her bucket list.

“I’m excited about it… to have the experience of saying, ‘Hey, I’ve been there and can attest to how things actually are,’ rather than just hearing others’ stories.”

Where exactly she will be located in the Middle East, she can’t say. But she’s been told by some, including her Nevada Police Sergeant Chris Brandes, to expect hot days, cool nights, and the standard military Meals Ready to Eat (MRE).

Bailey enlisted in the Iowa Army National Guard in 2013, when she was still a student at Grinnell High School.

“It was a goal of mine at the time. I’d always wanted to join,” she said. After going through all the required training, she specialized in the truck driving/convoy security area. At the beginning of 2017, she changed her specialty to medic, which proved useful when she landed her job with the Nevada Public Safety Department.

All officers in Nevada are required to go through EMT training. Bailey already had that when she entered the department in October of 2017 as the Community Service Officer (CSO), which deals primarily with animal control issues and desk work.

“I’d initially applied for a regular police officer position, but they’d filled that spot,” Bailey said. She was told another regular officer position might open in the near future, and she had her eye on that opportunity, which came in April of 2018.

“Being an officer was a goal of mine since I was young,” she said. The profession intrigued her because it involved different situations every day. “I thought it would be a chance to go out and do something interesting.”

The job hasn’t disappointed. Every day is different, and she loves the team she works with at Nevada. “It’s a fantastic work environment,” she affirmed.

In considering her year away, starting in late July, Bailey admits she’ll miss her job and regular life activities. “Just being able to drive around. I’ll miss interacting with my coworkers and the excitement of different calls. Army life can be kind of the same thing day in and day out,” she said.

She’ll also miss the food, like ice cream and especially the ice cream at Dairy Barn in Grinnell, where she often visits her mother, Sarah Bailey.

Most of all, she’ll miss her dog, Lucky, a Schnauzer/Poodle mix. “She’s going to hang out with my dad (Scott Bailey of Iowa City). He’s got a place for her to run around. But it’s going to be rough and weird without her.”

On the positive side, newer technology will help her stay connected to family and friends during deployment, and nothing beats the hands-on experience she’ll have as a medic.

“Just to get that experience of providing medical support for my unit, nothing compares,” she said. She plans to spend her free time overseas playing on a gaming laptop and catching up with reading clinical medicine books.

Best of all, when she returns in the summer of 2021, her job at the Nevada Police Department will be waiting for her.

“Josie likes getting out of the car and interacting, meeting and working with people,” Martinez said. “Josie is an excellent individual, and we are privileged to have her serving the City of Nevada. She will be missed from among our staff as well as the community. I wish her Godspeed and a safe return.”